THE CATEGORY IS DASHAUN WESLEY

by AMY KOMOROWSKI with THE WALL GROUP

I was a young man of 19 the first time my friend took me to a ball, and no, I’m not talking about anyone’s charity fundraiser. Ballroom was founded by queer Black and Latinx people where the art of voguing, made commercially famous thanks to Madonna’s song Vogue, was born. For those who would like a three-season fictionalized history of the world of ballroom culture, there is Ryan Murphy’s Pose.

It came to my great pleasure when my Editor-in-Chief Tatijana Shoan told me that I’d get the opportunity to work with Dashaun Wesley , host of HBOMax’s voguing reality competition series Legendary. From his powerhouse showman

voice to brighter than sunshine personality, I knew they didn’t build talent like this every day. The most impressive thing to me about him though, was his ability to breakthrough at a turning point in history where queer Black people are finally getting the recognition they have so long deserved.

Dashaun’s story is truly film worthy. He grew up in Brooklyn’s Bedford-Stuyvesant neighborhood, discovered the world of ballroom as a teenager, was mentored by ballroom legend Willi Ninja, toured with Rihanna, became a host on an HBO Max reality series, landed a recurring role on a Ryan Murphy’s Pose, and is now working on producing music. Go Dashaun, show them what you’re made of! 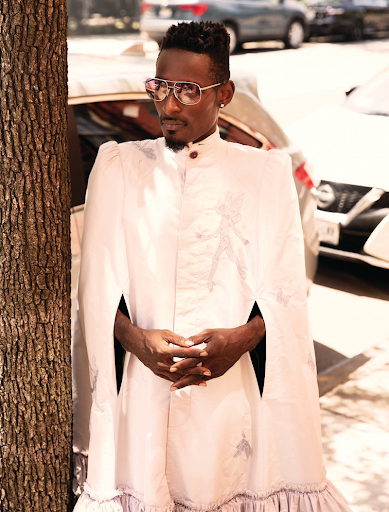 AS IF: I want to start off by asking you, how did you find your passion for dance?

Dashaun Wesley: I've always had a passion for dance, even as a child. I'm from Brooklyn, New York, and I used to live in the housing projects. We used to have this once-a-year celebration of the housing areas where people would perform and dance, and me and my friends used to all come together, create this dance routine, and perform every year. We kind of made a name for ourselves as kids, but I always had that passion for dance as a kid. It just somehow dwindled in a teenage years, but then I found ballroom and that was that.

How did you get involved in the ballroom scene? It's clearly something that's been a big part of your life for a while as the host of Legendary and having a recurring role on Pose, but I want you to really walk me through that moment when you first discovered ballroom.

I can tell you this, I kind of discovered a lot in a little time. I'm from an urban community, and there weren't too many people that were like me or as open and comfortable. When I was younger, I always knew I was a little bit different. I found the West Village in New York City, and there I found a place where people can just be who they are with no questions, no comments, or concerns. People just live their lives in West Village.

My first time going there at fourteen was after school, and I ran out there and I saw the ballroom community. There was a big crowd of people following this one man with a big, huge boombox. It was a press and play boombox, one of those big ones from the 1970s. I followed him and I followed the crowd. They stopped by the Christopher Street Piers, and created a circle, then they started to have this vogue battle. It was the first time I ever saw anything like that. I came back every day just so interested to know more. From the age of fourteen, I found my area, my people, and a comfortability. I also found a community that was just so amazing.

Were you part of a house yourself when you were younger?

When I first started voguing, I wasn't a part of a house. Within the first couple of months, I was just learning the community and learning people. I didn't join my house until 2000 when I joined The House of Latex, which was a non-profit organization called the Latex Project that created a ballroom house as well.

What categories did you compete in at the balls?

The first time I ever participated in a ball, which this was not my original category, I participated in runway, and I got chopped, but that was the best chop I've ever experienced because it lit a fire in me.

You came back with vengeance. You didn't let it defeat you. You wanted a comeback.

Yes! I'm a competitor and I love competition. I knew I loved voguing, so rather than walking runway I wanted to vogue, and I went right back to that same judge who chopped me for walking runway and said, ‘Oh yeah, you’re going give me my 10s for voguing.’