THE RE-INTRODUCTION OF ALY & AJ

Singer-songwriters and actors Alyson and Amanda Michalka, known as Aly & AJ, are the entertainment world’s double threat sister-act who have recently reemerged with a new, sophisticated look and sound. They started their careers as young actors on Disney, broke through as music duo, synth-pop sister act, Aly & AJ in the mid-2000s with songs like “Potential Breakup Song”, “Into The Rush”, and “Insomniatic”; briefly re-branded as 78violet, and have returned as Aly & AJ after a decade long pseudo-break from music (during this time they focused on their acting careers and released the occasional EP and single). Last year marked the release of their 4th studio album, A Touch Of The Beat Gets You Up On Your Feet Gets You Out And Then Into The Sun. There is a grounding to this album that’s different from former ones. Fans can feel and hear Aly & AJ breaking out of their past persona and entering into their own as women. Songs focus on harmony, melody, and deeper songwriting that surpasses their younger efforts. At 32 and 30, respectively, Aly and AJ are about to embark on their tour of the US to promote their new album. Before packing up their tour bus, the sisters stopped by my studio to talk about their evolution as artists, women, and sisters, while posing for a photoshoot unlike anything they have done before. 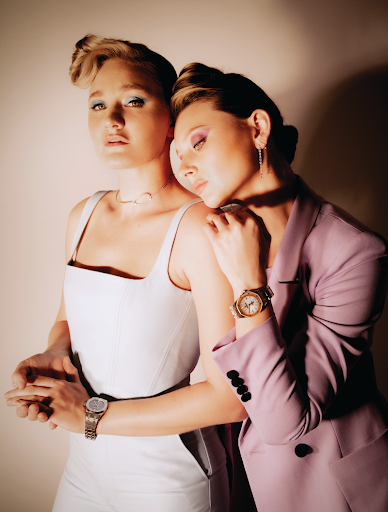 With its steel case, octagonal bezel, “Tapisserie” dial and integrated bracelet, the Royal Oak overturned the prevailing codes in 1972 and took its rightful place as a modern icon.

“It was inevitable that we would have a huge shift in our creative process and musical style, given that we started at such young ages.”