The current pandemic has triggered horrific hate-driven acts against Asian Americans that has not only affected ones that have been wrongfully targeted, but further the larger community. According to a National Report published by Stop AAPI Hate, between March 19, 2020, to February 28, 2021, there were 3,795 of these incidents reported to the organization. It is also important to note that these numbers only speak for the incidents that have been reported, and don’t reflect the countless other xenophobic acts that the community has had to endure. Many anti-Asian attacks go unreported due to reasons like language barriers and distrust of the government within the Asian American communities. Prominent names in fashion, particularly those of Asian descent, have used their social platforms to speak up about this issue.

It has now become more important than ever to listen to Asian voices, amplify them and raise awareness about the injustices faced by the community.

AS IF Magazine interviewed Victor Li, Ryuhei Oomaru, and Siying Qu, three incredibly talented designers regarding how their Asian heritage influences their art, their experiences in the fashion industry, the rise in anti-Asian sentiment, and how the fashion industry can come together to bring this issue to light. Siying Qu, one of the creative directors of Private Policy, was also able to share how she and her creative partner Haoran Li were able to design their fall/winter 2021 collection through inspirations derived from a very unique and dynamic story of the Chinese transcontinental railroad workers who helped build railroads in the U.S. in the 1800s. “After finding out about the transcontinental workers and discovering how they were able to blend Western and Eastern cultures in their clothing, we used interesting elements from their outfits as a source of inspiration for our collection,” said Qu. Further, she was also able to share how they used this unique collection to bring about awareness to the current situation of increasing xenophobia against the Asian American community.

The rich heritage and history of Asian cultures have long influenced the art of design for creators belonging to the Asian heritage. New York-based fashion designer, Victor Li, who was born in the U.S. and brought up in a Chinese household, explained how his designs acted as his narratives. “I try to present cross-cultural ideas, blending both my Chinese and American identities through my designs, and magnify the shared experience of peripatetic lifestyles,” said Li. His upbringing has allowed him to observe and study the cultural nuances in different values and ways of life.

For Ryuhei Oomaru and his brand, Overcoat, the pattern-making techniques that he learned when he was back home in Japan served as his inspiration. “I started studying fashion when I was 16 in my hometown of Fukuoka, Japan. I came across this book written in the 1960s by a Japanese tailor Mr. Kaijima who wrote about his analysis on tailoring,” explained Oomaru. “I was really fascinated by the way he wrote about tailoring in relation to the space between the body and the garments and how to manipulate the fit of a garment through tailoring. My passion for pattern making started here.”

Siying Qu and Haoran Li have long used their label, Private Policy, as an outlet to raise awareness about different socio-political topics. They even see themselves being similar to newspaper outlets, or “reporters with fashion design skills” as Qu puts it.

Last year, as they were noticing the surge in xenophobic acts towards the Asian community, they knew that they as a brand had a responsibility to bring this issue to light. While coming up with a design process, they thought of taking a chapter from history to gain inspiration.

“We thought about going back in history because there are so many hidden stories within the Asian American community that are untold. Not only in textbooks but also in general media,” states Qu. “Even when people bring up the history of people of color, they rarely bring up Asian American history.”

Upon their research, they discovered the alluring story of the Chinese transcontinental railroad workers and were instantly drawn to it due to its uniqueness and the captivating images that accompanied it. “We just saw so many amazing images of the railroad workers from China wearing the bamboo hat while sometimes matching it with a very Americana Western cowboy-like outfit. We could tell they were naturally blending two cultures for functionalities,” explained Qu. “They carried their faces in such ragged yet very prideful ways. We knew at that moment that there's way more story there to discover and the more we discovered it, we realized how hard they were working to overcome the challenges they were facing despite their contributions to provide for their family and fulfill their dreams.”

However, it wasn’t just the story itself that inspired the collection, it was the similarity of it with the reality of the world we currently live in.

“We were able to realize how parallel it was to the situation going on today with the xenophobia faced by the Asian community. So, we thought this would be a great topic to bring up through our collection. Stories such as this one are rich and there’s so much to express visually and through storytelling. Something fashion is really good at is storytelling.” said Qu.

When asked about the message that they wanted the collection to convey, Qu replied saying that it was “the pride of being either a descendant of Asian immigrants or just simply an immigrant.”

“I feel a sense of pride for what the prior generations have done for us in order to have a lot more freedom today to speak up,” remarked Qu. “We would also hope people see that Asians did help build modern America. There’s a stereotype that the Asian community always came out educated, rich, and well portrayed in the media, but there's a lot of hard work done by previous generations that brought us here today.” 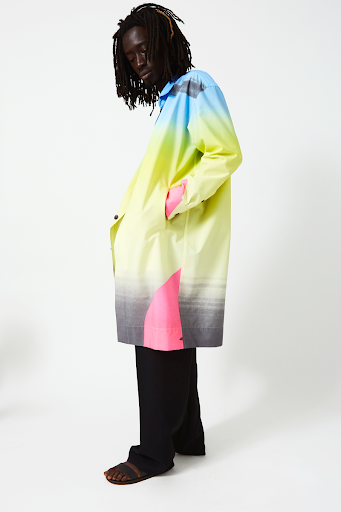