Dominique Fishback is a triple threat actress, playwright and spoken word artist, and one of the stars in the new Netflix film Project Power. Fishback has enjoyed a slow and steady rise to the top having also landed roles in The Deuce, The Hate U Give, and the multi-award-winning indie film Night Comes On, which earned Fishback the Chéris-Chéris acting prize.

Since her teenage years, Fishback has been writing and performing her own work. After attending high school in Brooklyn, she went on to attend Pace University’s acting program where she honed her craft. Fishback who proudly enjoys the moniker, “Brooklyn Princess”, represents a dream of a young girl who is proudly from East New York and navigated the elite world of Hollywood to make a name for herself and an actress and playwright who speaks to her generation.

Fishback, who has been self-quarantining in Brooklyn since March, freed herself from her condo confines for our photoshoot in Brooklyn’s Industry City neighborhood. I later “caught-up” with Fishback via Zoom to discuss everything from how Black actors are being perceived in the film industry nowadays, how she embodies dynamic characters, and what it was like to work alongside Academy Award winner Jamie Foxx in Project Power, currently available for streaming. 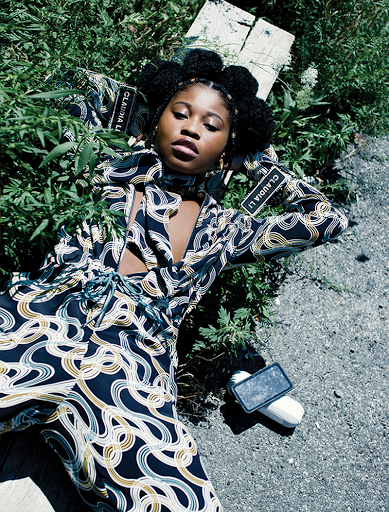 AS IF: One of the first things I wanted to know about you was what draws you to a particular project?

Dominique Fishback: There’s a lot of aspects like who’s directing the movie, who’s producing it, who’s starring in it, and what the character is like. I try not to get super caught up in who else is in it but focus more on the character in the story. When I got the appointment for this audition, I saw that Jamie Foxx and Joseph Gordon-Levitt were attached to the project, but I couldn’t imagine that the character I would play would be this cool. I had finished The Deuce, and I thought that because I’m older now they’re not going to see me as this young girl, so maybe I missed my window, but then this came along.

I haven’t done a full-on comedy yet, and that’s what I want to do, but when it comes to just things that are grounded in reality, I always try to find the humor in it. I like to find the humor in whatever I’m doing because then I feel fulfilled like it's a full circle. I don’t think about it in terms of, Oh, this is the funny part, I just say, well where’s my character at in this moment? Where is she and how does how does she feel? After the vet scene where my character raps for Jamie Foxx’s character, and after she calls him the “big dog”, that was actually an ad lib line. I was just really in the moment.

Talk to me about how you got the role in Project Power?

I got the typical audition appointment and saw that it was Jamie Foxx and Joseph Gordon-Levitt and I was super excited. So, I read the auditions sides, had to do two self-tapes, then had the chemistry test with Jamie Foxx. They flew me to LA for a day, and I got to the hotel and realized that I lost my wallet at the airport. I didn’t have my ID, credit cards, nothing! I started freaking and called JetBlue and they said they would look for it. They put in a claim but said if it’s not found in a month then the claim is closed. So, I’m like this is not good, but I brought my passport because something told me just bring your passport even though you’re not traveling internationally.

Yeah, right! So trusting your instincts is very important. At the hotel room, I was freaking out, but they gave me a voucher to pay for breakfast in the morning. I tried not to let this situation get in my way. I was feeling very positive, I knew my lines, I felt ready for this. I’ve been working for this my entire life. I felt ready, but these little things can really distract you from what you’re supposed to do, so I tried my hardest not to let it distract me. In the morning I listened to some gospel music, Jay-Z and Beyoncé—I like to mix it up a little bit. I laid on the floor and just tried to meditate a bit. When I get to the audition my car pulls up at the same time that Jamie’s car is pulling up. I got out the car and I said 'Mr. Jamie Foxx,’ and then he turns around he and introduces himself and he gives me a hug. Then, I said to myself, okay, now I can focus on the actual audition. Then they have me waiting for 40 minutes. I hear Jamie telling a story, everybody’s laughing and my heart's beating so fast. I’m ready to get this thing. I get into the audition room and I ask them if I can lie on the floor, adjust the camera, and really take control of the room. After the audition I’m sitting there and Jamie Foxx asks if I can rap? I said, no, but I do spoken word, and he says, oh, why don’t you do some for us then? So I get up and I do my spoken word piece, the casting team records it, and they love it. I’m super excited, and I said, you know this turned out to be a really good trip. I mentioned I lost my wallet in the airport and Jamie says oh, you need money? You need it? Because I got it, I got cash. Then he pulls out this wad of cash with hundred-dollar bills. He gives me a hundred, one of his directors gives me fifty, and Jamie said how many times do you get thanked for an audition with $150. He was absolutely right. I actually didn’t get the part originally, somebody else got it, but then a month later they said something happened with scheduling and now they really want me, which was great! At that point I had put it out of my mind. It had been a month. I couldn’t believe I didn’t get it. I was destroyed and devastated, but I let it go, and then they came back around. The same day that I secured this part, I got an email from JetBlue saying my wallet was found! It was a whole full circle experience. When I got to set and we finished filming, I gave Jamie a frame with a picture of us and then in the back it had the hundred-dollar bill that I signed, so I didn’t owe him a hundred dollars!