by GEORGI SANDEV for FORWARD ARTISTS

by LUIS GUILLERMO for FACTORY DOWNTOWN

It was a warm summer day when actor Halston Sage walked into my studio accompanied by her water bottle. Her dewy complexion inspired me to hydrate on the spot. This demure and affable actor, at nearly 26-years-old, has wooed enough film critics to be crowned one of the top ten stars to watch by Variety, the uber-important entertainment insider trade publication. Since her small screen debut in the 2011 tween series Victorious, Halston has steadily climbed the entertainment food chain to land a coveted roll in the Seth Rogen and Zac Efrom film, Neighbors (2014). However, her star began to shine when she co-starred in the Seth MacFarlane television series, The Orville (2017). In the series Halston played an alien security guard with just the right amount of bravado, humor and drama that both audiences and critics were waxing poetic over her performance. Now, the actor is starring in the new television series Prodigal Son, a dark comedy crime drama, about a family who has to live with the reality that their patriarch is a serial killer. The killer’s son, Malcolm Bright (Tom Payne) becomes a prodigal criminal psychologist who helps the NYPD solve their worst crimes. Halston plays the killer’s daughter, is as normal as butter on bread, works as a television journalist, and desperately wants her brother to stay away from the family’s murderous roots. In this series Halston proves, once again, her range as an actor who has far more to offer than just a pretty face. 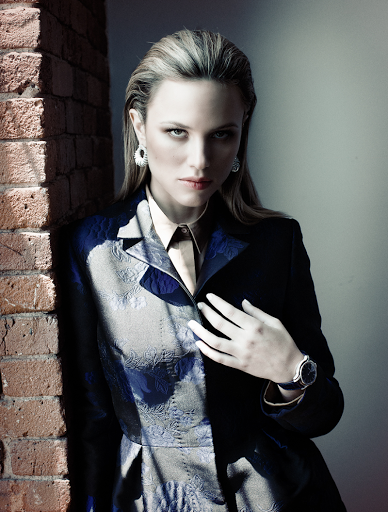 AS IF: I enjoyed shooting you for this editorial.

Halston Sage: It was such a fun day shooting with you, and we had such a great group of people. It was exciting, and I couldn’t believe how amazing you were at shooting with only natural light. I haven’t seen that done like that before.

Working in natural light looks simple, but it’s actually tricky to do well and you have to really understand how your lens reacts to light and shadows that are constantly in flux. It’s a very different situation than studio lighting that is always under your control. I thrive off of the interaction between what I can control and what I can’t control, and that is why I chose to shoot you in natural light for this story.

That is really interesting, I have never heard it be explained like that before.

But I want to talk to you about your current project, Prodigal Son.

It’s a dream for a few different reasons. A few months back I found a book called The Serial Killer’s Daughter, and I was fascinated by the character idea: someone who wakes up in the morning and knows that they share blood with someone who has the capacity to murder people. Then, the Prodigal Son script came along, and that’s the premise of the script. It has a great new take on crime drama because it’s very character driven. It doesn’t just focus on the crime of the week, but delves into family dynamics and the relationship between all the different people who would have been affected by knowing that they are related to a serial killer.