Artist Kehinde Wiley heads a revolution fueled by beauty, gentility and grace. His large-scale paintings, of mostly marginalized brown skinned men and women from around the world, are finding their rightful place on the white walls of art institutions around the country. The artist references historic Old Master paintings that portray strength, purity, power, and pride. He appropriates the poses as references for his subjects, whom he casts on the street. Unlike their 17th-century white predecessors who are disassociated from contemporary life, Wiley’s heroes, by virtue of their clothing, background, and gait, become endearing and at times vulnerable, in the warmth of the painting’s totality.

Wiley’s singular style is a fusion of wildly disparate looks, that include French Rococo, Islamic architecture, West African textile design, and urban hip hop. His paintings force the viewer to contemplate subjects, whose attitude and attire both contradict and embrace their decorative backgrounds, while both enveloping them and at the same time, spitting them out. Kehinde Wiley’s paintings command space, crave attention, please and titillate in their grandeur and confidence. 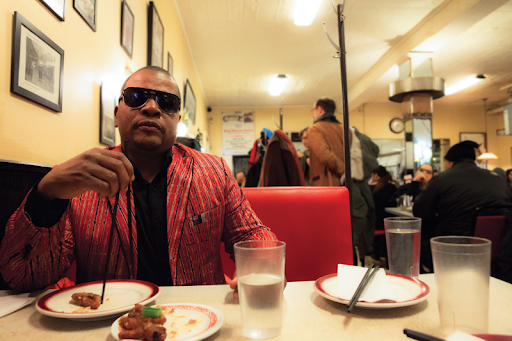 AS IF: You were born in L.A. to an African American mother, and Nigerian father you never knew. When you were 20 years old you went to Nigeria to find your father and learn about your paternal roots. What did you find upon meeting him? And, what did you learn through that experience that you apply to your work today?

Kehinde Wiley: That’s a very good question, and it’s good to go there because I have very few conversations about that. It is really crucial in terms of my understanding and interest in Africa, but also my interest in the rest of the world. My mother sent me to art school when I was very young, and to Russia to study art when I was 12, and that plays a huge role in the mind of a kid growing up in South Central Los Angeles in the 80s. My whole world view started in the inner city, and all of a sudden I’m hanging out with Soviet kids in a small forest village outside of Leningrad. I soon learned language is both a barrier and a tool. Very few people spoke English, so I had to study Russian, and that made me an internationalist from the get go, which is an advantage privileged children from the wealthy elite have. Because my mother did that, it made it easier for me to decide to find my father in Nigeria. My mother didn’t want me to do it, she was concerned I’d be disappointed. Their relationship was conflicted, but I needed to scratch the itch I had. A lot of that urge stemmed from being an art student, and I had a camcorder! I wanted to document the journey of finding, and meeting my father. There was this sense of the hero’s journey. Africa and my father became a personal desire, but also a tool to understanding who I was. We as artists want content, a story to tell, and if I can turn over a couple rocks in my own backyard, boy, I could really work this thing! (Laughs) I was so naïve! I didn’t realize how emotionally taxing, and real life this shit was! I was a naïve young artist who imagined what the scene would look like, and thought mom would be very happy, but it didn’t work out that way at all!

Not at all. It never does. The romantic in me was lost in that trip. This idea of who my father would be, how he would be towards me, how he would look, what the country would be like, didn’t match up to what I had imagined. Instead, I was confronted by the cruel indifference of the world. It reminded of me of being out in the wild, and looking up in awe at a majestic mountain to admire its beauty, and suddenly an avalanche buries you alive! Sure, nature and life are fabulous and beautiful, but she’s also a real hard girl!

I set-up a number of encounters via networks of Nigerians in California, and I was able to make contact with people who lived there. I didn’t I expect people to invite me into their homes, which they did, and I didn’t realize the level of poverty on the ground in places like Oshodi. I stayed with a family who was unbelievably poor. They embraced me as one of their own, the son of a relative who made it out and lived in California. We slept on the ground, and rats would walk across our bodies as we slept. They travelled from city to city with me, mainly to visit architectural departments helping me find my father.

Your father is an architect?

We knew that he had studied architecture in UCLA and USC, where he met my mother.

You really had no idea where your father was?

I knew his first and last name, and what he studied. We had no address, no photographs, nothing. Nigeria is the most populated country in Sub-Saharan Africa, so it was really tough. I would go from department to department, each time being let down more and more. Finally, someone said to go with his last name, and to that area of the country where his name came from, which was Cross River state. I went to Cross River state, and to the University of Calabar’s architecture department, and found his name on the door. He was the head of the department! I have footage from when I first walked up there, and you can see how the camera starts to shake. Finding my father was a fantasy, and all of a sudden it became real. I walked in and talked to the secretary who informed me that he was not in, but he looked at me and said, I believe you, you look just like him. I didn’t have a place to stay, so he let me stay with him. He worked with my father for 15 years, he told me he would take me to my father who was in another city three hours away where he had another office, and that’s where I first met him. The secretary went in first to explain the situation… (laughs)… before you freak-out there’s a kid out in the car. It took an hour for them to finally let me in! I looked across the room and saw a really big desk, and a really small man. I was expecting this godlike father figure, and instead I found a very thin, frail, paranoid, fearful man who didn’t know why I came or what I wanted. He tried to pretend that he didn’t know who I was, but I had a letter. My mother was an extraordinary letter writer, as was he. They would write long letters back and forth, and I really got a sense of their relationship, and the conflicts through these letters. After that letter he couldn’t pretend any longer. He said, so you must be my son. He said it just like that. My mother was pregnant with twins when he left, and she already had three children at home, and was going to college. She had actually contacted him asking for baby names so we could have proper Nigerian names as twins. She even went to Nigeria to find him, but didn’t have any luck. Her suspicion was that he was being hidden.

Did he name you?

My mother gave us names from a competing tribe (laughs), so if my father ever met me and my brother it would be a barb!

Your mother’s no joke!

Yeah, she was studying African linguistics, so she knew very well how to get the knife in there! 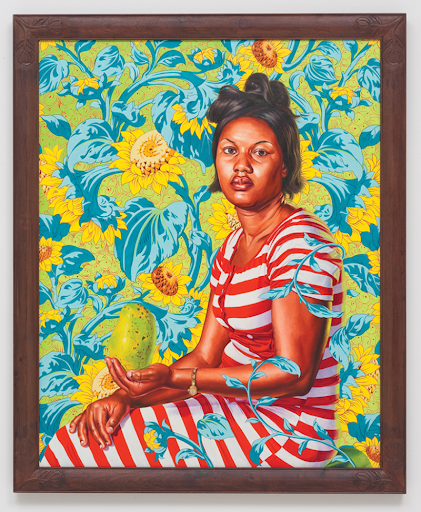