by REBECCA RESTREPO with TRACEY MATTINGLY

SPECIAL THANKS to THE ROXY HOTEL

I was first introduced to Ilana Glazer when my girlfriend, who was recovering from a painful divorce, hosted me at her home while I was going through a fight with my husband. Before we retired to bed, she queued the Comedy Central sitcom, Broad City, that she claimed was keeping her sane throughout her divorce and insisted that I watch. After a night of binge-watching season 1, the power of female friendship and how it can get you through anything in life was reconfirmed.

The next day my husband and I got over our fight and I was an Ilana Glazer devotee. Ilana, along with her Broad City co-creator and co-star, Abbi Jacobson, showed us how two millennial girls navigate New York City when the ins and outs of everyday life get in the way. At the core of the show was Ilana and Abbi’s friendship that could survive anything. It’s a show about girl-power and the enduring power of female relationships, which is a through-line through much of Ilana’s work. So is the topic of patriarchy and the insidious way it controls all of our lives, which brings us to her new film project, False Positive.

The film, which is co-written and co-produced by Ilana and John Lee and stars Ilana, Pierce Brosnan, Justin Theroux and Gretchen Mol, is a creepy and disturbing journey through the trials of pregnancy and IVF. The film explores the anxiety, fear, joy and elation women go through trying to get pregnant, but through the lens of a horror film. This clear genre departure for Ilana left me curious and I wanted to learn why this celebrated comedian chose to tell this story in a horrific way. So, after our fashion shoot in New York City’s Roxy Hotel where Ilana—as pregnant as a ready Jiffy Pop—posed as if pregnancy was the ultimate accessory (and it is), we sat down to discuss her new project, her personal pregnancy journey, life as a comedian and blowing the lid off of patriarchal conspiracies. 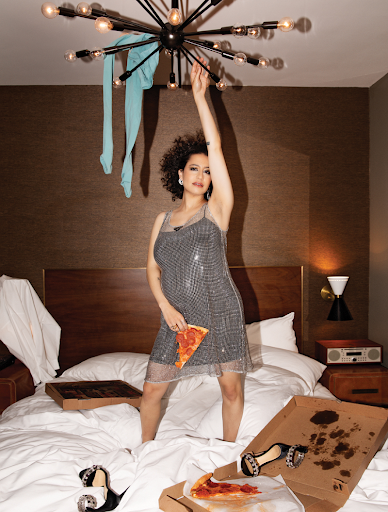 This ring was quite literally inspired by prison. Lock the gems up and throw away the key.

7 carats of diamonds make these earrings a chic party accessory. 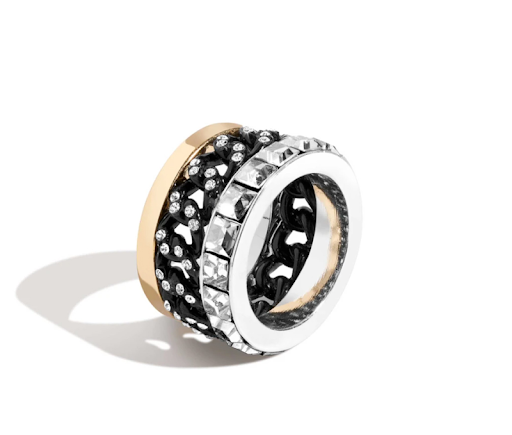