Marco Brambilia’s work is ready for its close up now, Mr. Demille. Take a trip on over to Maison Margiela’s Crosby Street store to find a special 11-monitor video installation of Nude Descending a Staircase No. 3 by installation artist Marco Brambilla. Brambilla’s work is a contemporary digital reinvention of Marcel Duchamp’s 1912 masterpiece, Nude Descending a Staircase, No. 2., and this marks the first time it has been presented as an indoor installation fragmented across 11 screens with each screen displaying asynchronous passages of the work.

Although Brambilla’s work was originally realized with the Art Production Fund, he felt that exhibiting it in the Margiela concept store seemed like an obvious choice given that the concept of deconstruction behind Margiela’s design philosophy relates directly to his work. He spent two months working on this project, and says video was the best form for this project because it allowed him to create a series of digital readymades allowed me to deconstruct the human form and the body into fragments.

“Duchamp once said he forced himself to contradict his own self in order to avoid conforming to taste, that sentiment, I believe, is echoed by Margiela’s current creative director John Galliano and Margiela himself,” Brambilla explained.

“The piece itself is a recreation of the original’s memory, which is also similar to Margiela’s practice of reworking garments to create something new from their memories,” Brambilla added. “We both re-process and shape images and materials.”

Brambilla wanted to do Nude Descending a Staircase because he said, “When Galliano transformed garments into a surface for projection with the reflective fabric, China Star, that would have been a Surrealist's dream!”

Nude Descending a Staircase No. 3 featured in the Margiela concept store explores that idea on a monumental scale. The piece’s temporary intervention is meant to transform the building into a larger-than-life version of the painting coming to life.

Brambilla says he was drawn to Duchamp’s work because, “I had a poster of Duchamp’s Nude Descending in my bedroom when I was very young and would stare at it before going to sleep. It would come alive before my eyes. I hoped to recreate the same sense of wonder that I had being exposed to this work for the first time. I wanted to take one of my favorite sources of inspiration into the technological realm and give it a new digital life.”

Since its inauguration, Maison Margiela’s transitory concept store in SoHo has featured the collections of the fashion house alongside independent works by contemporary artists. This installation by Marco Brambilla kicks off a new series of artist interventions expected in the upcoming months. 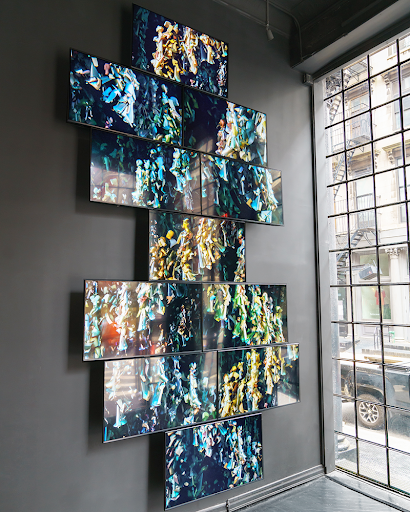