The goal of every artist and artistic institution is to be in a continual state of evolution and reinvention. This is also true for the legacy, Italian luxury, fashion brand Max Mara. This year marks the 5th anniversary of Max Mara’s partnership with the Whitney Museum in New York City’s Meat Package District, as well as their popular modern classic bag, Whitney Bag. Both the building and bag were designed by the Renzo Piano Workshop. The bag takes its design cues from the Whitney Museum building itself, where the industrial and sleek façade was reinterpreted to meet the demands of new materials, as well as the women who will be carrying it. To celebrate the bag’s popular success, Max Mara’s Creative Director, Ian Griffiths called upon his diverse background in art, design and architecture, to reimagine this classic. Griffiths has introduced a new color palate, silk floral lining and additional scarf accessory inspired by artist Florine Stettheimer’s (1871 – 1944) painting “Sun” (1933), which is part of the Whitney Museum’s permanent collection. This special edition bag is dedicated to the painter, who was an early feminist and pioneer of American Modern Art.

During this unprecedented time in history where so much of people’s thoughts are on the pandemic, I spoke with Griffiths who was nestled safely in the English countryside at his home in Suffolk with his husband and dogs to talk about happier, creative things. We spoke about the birth of the bag, the 5th anniversary reanimation and inspiration behind it, the striking Max Mara spring/summer collection, how this pandemic is influencing him on a creative level and what it means for the future. 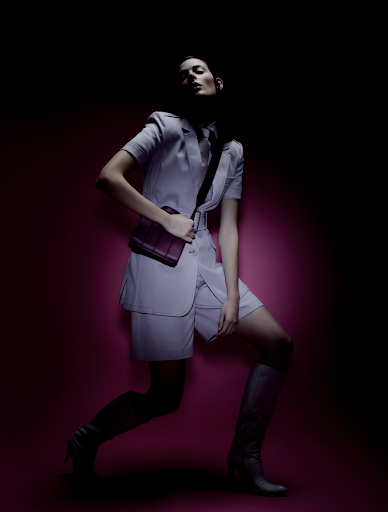 AS IF: This year celebrates the 5th anniversary of The Whitney Museum and the Max Mara Whitney Bag designed by the Renzo Piano Building Workshop for Max Mara. The bag has become a cult classic since its release five years ago, and as most of us know, it takes its design cues from the actual Whitney Museum building here in New York’s Meat Packing district. Now, you actually studied architecture before working with Max Mara. Is that how you came up with the idea to have an architect and his team actually design an accessory for you?

Ian Griffiths: Yes, and it’s not a coincidence that I’m the Creative Director of Max Mara with my architectural background, because I think that Max Mara is a brand on the scale of things closer to the architectural end than it is to the throwaway fashion end of the spectrum. If you look at Max Mara particularly in relation to the design of its coats, the Max Mara coat is the nearest thing to a building that you’ll find anywhere in terms of its relationship to the wearer. Max Mara has always had an architectural approach. Not only was it a personal ambition to work with Renzo Piano Building Workshop, but also and ambition for the brand which has always had an architectural approach.

What kind of communication did you have with the Renzo Piano team to ensure the bag design was in alignment with the Max Mara brand and woman?

There was a semi-constant exchange of ideas between us and the Renzo Piano Studio in Genova while we were developing the bag. You can never be certain what the outcome is going to be with a collaboration, but the chances were in our favor that the result was going to be a success for the Max Mara woman. When Max Mara chose to collaborate with Renzo Piano, we expected the result would be a design classic, and you’d expect to get a design classic from a great architect like Renzo Piano. An architect or a designer of the maturity of Renzo Piano automatically steps into the shoes of the person who’s going to be occupying his or her building, or in this instance, the woman who’s going to be using the bag. That’s second nature to an architect or a designer of that caliber and you’d expect that from Renzo Piano and his team. I’ve also had great communication with Renzo’s right hand, Elisabetta Trezzani who was very closely involved with the project. On occasion she would prompt us by saying something about the dimension of the bag, or the way that you’d wear the bag as a woman, and that would send us in the right direction.

The night we launched the Whitney Bag in New York five years ago at the Boom Boom Room, Renzo Piano arrived with his wife Milly who was carrying the Whitney Bag. That indicated to me that while he was designing this bag he was thinking of the women that he knew. And, that also confirms that a good designer has the instinct to place themselves in the shoes of the person who will be using his or her object or building.

Did it go through many iterations before it developed into what we see today?

I’ve looked back through the development sketches and it was a very linear development. The idea was to have the bag echo the physical form of the building itself, and that’s why we chose to develop a bag, so we could achieve something that had the same visual language as the building itself. The challenge was the technical realization of that. Max Mara, myself, and Renzo Piano and his workshop held the view that the key parts of the design process is not just simply coming up with a concept, it’s making that concept a working reality. Having conceived the idea that the outer shell of the bag would bear the ribbed motifs that you find on the roof and outer shell of the building, it had to then be translated into leather, and that required developing new technology. Those ribs are not seams in the leather, they’re actually molded into the leather itself. That required preparing the leather with a laser-operated stencil, which was new technology. Once the leather had been prepared by the laser treatment, the ribs were sewn in by Tuscan craftspeople. The technology was developed specifically for the Whitney Bag, and this technology then joined with an ancient, hundreds of years old craft. 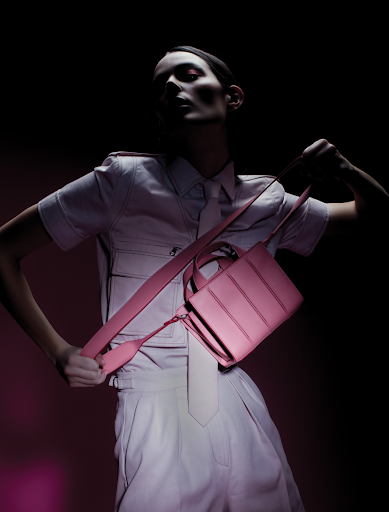