with THE WALL GROUP

with THE WALL GROUP

Naomi Watts has lit up the screen since her infamous break-out role in the David 2001 hit, Mulholland Drive. She has that rare quality all actors desire—a bankable brand synonymous with both beauty and excellence. Yet, Watts knows how to conceal her 10,000-watt persona behind every acting role she undertakes. Her boundless acting range indeed demonstrates she can command any role in any genre. It’s a magical combination that directors and producers always want in their stars. Indeed, one of Watts’ secrets to success is her remarkable ability to be both movie star and girl next door, in other words, both approachable and incomparable. Whatever the project, critics are quick to praise this Oscar-nominated actor who transports her audiences to the world she is inhabiting.

Watts proved her fortitude as a struggling vaudeville actress against a mighty gorilla god in the blockbuster hit, King Kong and a journalist investigating a virulent videotape in the nail biting thriller,The Ring. She then survived the 2004 Indian Ocean tsunami in the true life disaster drama, The Impossible, played a grief-stricken mother in the crime drama, 21 Grams, and a beauty queen with an identity crisis in the self-described “existential comedy,” I Heart Huckabees.

Watts has also graced the small screen in several series, including Showtime’s The Loudest Voice, where she played Gretchen Carlson, the former Fox broadcast journalist who was the first to file a lawsuit against then Fox News Chairman and CEO, Roger Ailes, for sexual harassment, and Netflix’s Gypsy where she played a psychologist who secretly infiltrates the private lives of her patients. Her latest role in the film, Penguin Bloom, is based on the true story of a woman, wife, and mother who becomes a paraplegic after a devastating fall from a balcony while on vacation in Thailand. She and her family later take in a wounded magpie that gives her the strength to emotionally cope with her changed life.

With over two decades as a superstar, Watts has now set her sights on another passion, ONDA, a clean beauty authority where people can buy and experience natural beauty products that are ethically sourced and wonderfully nurture the body. This move toward environmentally responsible consciousness is a priority for Watts and an extension of who she is.

AS IF Magazine wants to celebrate this inimitable actor and her passions in a visual presentation that surpasses the typical magazine editorial and becomes a work of art that tells the deeper story. To do so, we have collaborated with the Italian figurative painter, Max Pellegrini, celebrated for his large-scale compositions that fill a canvas with rich colors and iconography. Pellegrini draws freely from a range of disparate sources, including Old Master paintings, pop culture, contemporary life, music, religious iconography, literature, and fashion. He combines these references in landscapes and narrative scenes, often featuring human figures from different eras and environments, while portraying his female figures as emotional poetic symbols.

Known for her versatile and enduring performances, Watts fits within Pellegrini’s rich symbolic world perfectly. She is center stage in this collaborative artwork that shows her strength, beauty, passion, and humanity in a contemplative world that echoes our current environment and the plaintive and introspective state we find ourselves in. 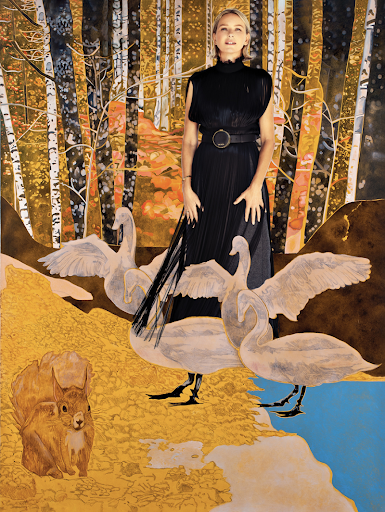 Valentino dress | The Madonna of the waters; the last embrace while a multicolored thunderbolt cleaves the whole scene. Oil on canvas, 160 x 200 cm, 2011-2014

“I’ve been lucky to have worked with some of the greatest filmmakers of our time, but I think with a first time filmmaker there can be something extraordinary ready to come out of that experience.” 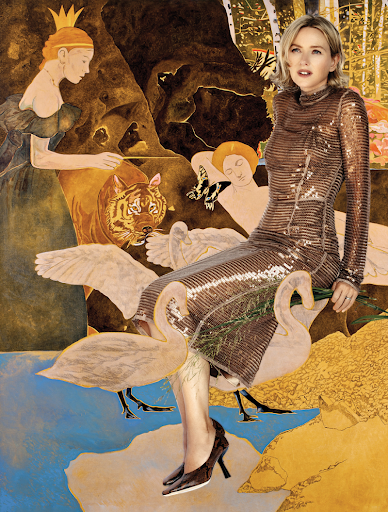 Night turns Leda into a swan and a squirrel predicts a storm. Oil on canvas,