Fashion designer and creative entrepreneur Virgil Abloh left behind a legacy worthy of fashion history. From creating his acclaimed streetwear label Off-White to becoming the first Black designer to be menswear director of Louis Vuitton, Abloh was legendary. He was also a master of collaborations known for working with everyone from Mercedes to Baccarat.

A tribute to Virgil Abloh’s work with Louis Vuitton and Nike in the form of a grand exhibition in Brooklyn’s Greenpoint neighborhood succeeded the auction. In total, Abloh reimagined Nike’s Air Force 1’s in 47 different styles meant to accompany the spring 2022 collection, his last collection for Louis Vuitton. 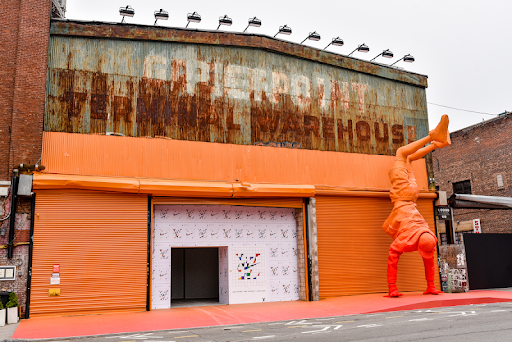 The exhibit brought spectators into Abloh’s world in a unique way. The front featured a giant screen displaying videos of the sneakers being made. The back of the exhibit featured a giant treehouse with the turntables Abloh used when he was DJ and various Louis Vuitton accessories in a display case underneath. The walls also featured one of Abloh’s mood boards when he was conceptualizing the Louis Vuitton and Nike collection. In addition, a little over a dozen actual pairs of the sneakers were on display for the treehouse.

Only nine of the 47 styles entered production, with price tags ranging from $2750 to $3450. If you think that price tag is steep, the expectation is they will go for far beyond that on resale and auctions.