When art world aficionados hear the word minimalism several painters might come to mind including Donald Judd, Frank Stella, and Robert Morris. The space for minimalist artists and the practice of minimalist art in itself has been predominantly associated with white men. For this decade of the 21st century, there is an artist out to make room for others who don’t fit the “traditional mold” of what it means to be a minimalist artist.

Nikki Terry is an up and coming Black lesbian minimalist painter whose work has been a form of therapy for her. Born and raised in Baltimore, Terry is a middle child who admits to having middle child syndrome. Her older brother unfortunately passed away from AIDS, and her younger brother is retired military veteran who served for 22 years. Terry, who is a self-described daddy’s girl, lost her father 11 years ago, and that became a turning point for her in how she approached her art. She didn’t always have a lifelong trajectory of plans to be an artist though.

“When I was in third grade, I said I wanted to grow up to be like my art teachers, Ms. Moses,” Terry said. “She had these funky heels and bracelets stacked on her wrists. I wanted to be like her because aside from the art my dad and I did together when I was little, art was my first introduction to freedom. It allowed me to express what I was going through at home. Art was my favorite class. Even though my dad wasn’t a trained artist, we spent tons of time coloring together at home. I come from a family where there was domestic violence and in my extended family there was also a lot of trauma. It was through art and my coloring books that I found an outlet for what I was feeling, that’s where my life as an artist began.”

Despite finding her heart in art at such a young age, Terry stepped away from really immersing herself in art for years after elementary school. There were times when she was in middle school and high school, she did become fascinated with graffiti art and enjoyed drawing bubble letters, but it wasn’t until her early thirties she started painting again and rediscovered art. Her art ended up becoming therapy for her to reclaim the childhood she felt was lost to her.

“I had very loving parents. I saw them hugging, kissing, and being happy together,” Terry said. “Then there was the other side of that where there were drugs, fighting, and chaos. My oldest brother was a victim of child abuse by my father. It was a love hate situation in my home. That trauma saturated my entire being, it saturated my life as a young adult, and it consumed me. I had a therapy session where my therapist described my relationship with my father as ‘emotional incest.’ I refuted this saying my father was not incestuous with me to which my therapist explained, ‘no, this is different from a physical act of incest.’ What she meant was I had to play the role of my dad’s therapist, mother, wife, and best friend. I was his everything and I was so protective of my father. If he’d come home drunk, I’d wait on the stairs for him so him and my mother wouldn’t fight. I would always defend him in terrible situations. I didn’t get the joys of being a kid.” 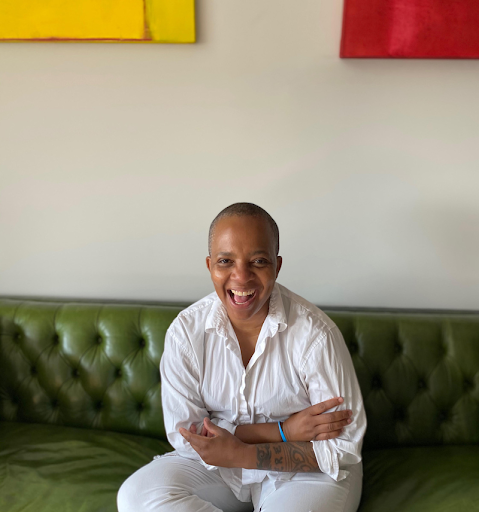 At 51, Terry has decided to reclaim her childhood lost through her art. After years of protecting her father it made her feel like she lost herself. She never reclaimed herself as a teenager or young woman, which led to her not even thinking about art for years. This led her to “chasing quiet” as she says. She ended up moving to Mt. Vernon, New York and got a studio apartment, and that’s when her passion for minimalism began.

“As a teenager, my room was a mess, I was in a home where there was just so much dysfunction,” Terry said. “This apartment I had ended up being so bare. I had a mattress with a box spring, knife, fork, and spoon, a plate, a cup, and a radio. I was trying to find emotional support in my home.”

When Terry’s mother and father were in their sixties, they got diagnosed with mental health disorders. Terry began trying to navigate that situation, but faith would find her one day while she was walking her dog.

“I had this friend I met at the dog park in Brooklyn, and we’d always walk our dogs together,” Terry said. “One day he asked me to come by his house to see his art. When I walked into his bedroom it was like a door for his artwork to speak to me was open. My friend was an abstract expressionist and his work was very spiritual. It’s like I could hear the artworks asking me, ‘where have you been, we’ve been waiting for you this whole time.’ I grabbed my dog, ran out of his house, ran to Pratt, grabbed the first canvas and whatever paints I saw, and went home and started painting. I’ve been painting ever since.”

When Terry started painting, she drew very loose figures like silhouettes of the female body. The only thing she could identify with at first was being a queer Black woman. People saw her artwork and encouraged her to apply to Pratt Institute to study art. At first, she was reluctant because she was a self-taught artist, but she applied and was accepted.

Right before she began studying at Pratt, the silhouette figures she was drawing became looser and looser moving in the direction of expressionism. This was the moment her art and her childhood started coming together.

“I grew up feeling like there was this constant noise in my head, ears, heart, and body,” Terry said. “When I lived in that apartment in Mt. Vernon with the least number of things possible to survive, that was the beginning of the process of my life as a minimalist. I knew I was going somewhere with my painting when the figures started becoming looser and my paintings had more negative space.”

One day, someone saw one of Terry’s paintings and proceeded to ask her if she was familiar with the works of Barnett Newman because the particular painting was very reminiscent of his. Terry, at the time, wasn’t aware of the artist, but when she went to look up Barnett Newman’s work, she found herself in tears because of how similar her painting was to his. It was at that moment she realized that she was onto something. The more she studied him the more she felt closer to that “quiet’ she kept seeking.