AN ARTIST’S MUSINGS WITH SCARLETT JOHANSSON

for THE WALL GROUP

for THE WALL GROUP

As the 4th-highest-grossing worldwide box-office actor of all time, Scarlett Johansson is one of the most valuable performers of the modern age. Her rich, husky voice sounds laced with whiskey and smoke and seems to teasingly belie her peaches-and-cream complexion, hourglass figure, and heart-shaped face. It’s easy to fall head over heels for this blue-eyed creature who is the embodiment of sensual guile and whose likeness to Marilyn Monroe is undeniable.

Despite her screen-goddess superpowers, Scarlett Johansson is an actor’s actor who continues to challenge herself in unexpected roles. She can seamlessly shift from drama to comedy, a feat not many actors successfully master. Her extensive acting range covers all genres from drama to comedy, and includes a comic-book hero blockbuster franchise, sci-fi indies, animation voiceovers, and the thespian also happens to be a three-time Woody Allen muse and Tony Award winner (Best Featured Actress, A View from the Bridge), the pinnacle for actors who honor their craft above fame and fortune (which the actress happens to have in abundance anyway).

Scarlett embodies a calm confidence on screen, an almost hypnotic allure. She is in a league of her own, and therefore we were tasked with the responsibility of creating a feature that goes beyond the typical magazine editorial—we wanted to turn her into a collectible work of art, but how? We decided to pair her with a contemporary artist, but who would the artist be, and what would be the result of this collaboration? Scarlett is an actor who does her homework, so it was not surprising to learn that she knows art and the important artists working today. This multi-award-winning actress with a star on the Hollywood Walk of Fame tasked us with finding an artist whose style is unmistakable, whose name commands respect, and whose work is collected by the biggest museums and esteemed galleries around the world—in other words, we needed to find an artist as important in the art world as Scarlett is in the entertainment industry. Many names came to mind, but the name that resonated the most was a contemporary American artist recognized as one of the guiding lights of postmodern painting, David Salle. 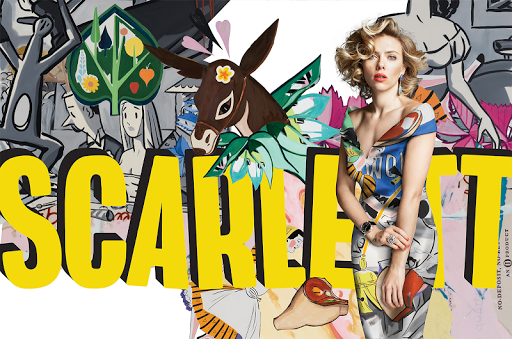 Salle’s work is uses poetical juxtapositions, the exact meanings of which are hard to pin down. He combines original and appropriated visuals signs and symbols, such as imagery from popular culture like a Kleenex box, with imagery from art history, such as elements from a Caravaggio painting. The artist takes abstraction and the human figure and manipulates images by combining a variety of different styles and textures. He continually brings unexpected symbols together in unpredictable ways. Salle’s work is always intriguing, invariably laced with a sense of humor, and continually confounds assumptions. His style is identifiable, while each and every work conjures something new for the viewer. These notions resonate with the work Johansson challenges herself with. Her movie choices are varied and her characters are always complex. Both Johansson’s and Salle’s work are unpredictable yet identifiable in their style and impact. We were inspired just by thinking of what these two forces could do together.

For AS IF magazine, Salle imagined a world Johansson would inhabit inspired by his current show at the Skarstedt gallery in London, “Musicality and Humour.” Ideas were shared with Scarlett, and on the day of our shoot Salle directed Johansson to play with the idea of living within a tree as I photographed her. From sitting on gnarled roots, leaning against a tree trunk, to hanging upside down from a branch, Johansson committed herself to the role one hundred percent. Salle then intertwined the images of Scarlett with the recurring elements in his current series, which includes black-and-white illustrations from the ’40s and ’50s commonly seen in popular publications of the day, like The New Yorker. The subjects in his new series are from another era; notes of Americana nostalgia make a kind of history painting. Scarlett Johansson, an actress so fresh and modern and yet with a style and elegance that recalls the great actresses from the ’40s and ’50s, inhabits Salle’s world with a dominance, as if the world materialized as the result of her own imaginings.

The following editorial is the aforementioned collaboration. The following text is a conversation between Scarlett Johansson and David Salle in which the artist and the actress discuss her industry, her craft, politics in art, people’s perceptions of her work, and her experience during our shoot. 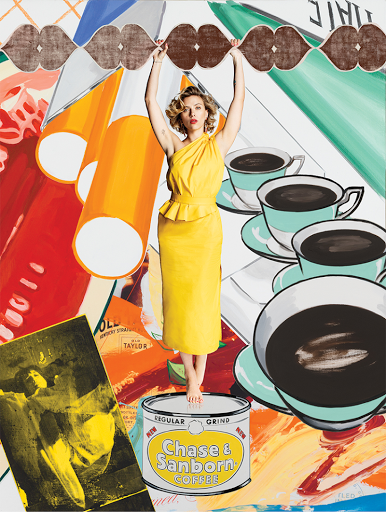