Tabula Rasa Dance Theater was founded in 2018 by award-winning choreographer and artistic director Felipe Escalante, who, a dancer since aged 6, was trained in folkloric, modern, contemporary, flamenco, and ballet techniques in his native Mexico. From the start, the company has been lauded for its sensual, propulsive style, and pristine, visceral choreography.

The company has been concerned since its inception with the pressing social-justice issues of our times, and with the historical precedents for them. Because Escalante believes choreography must elicit powerful and sometimes difficult emotional responses, TRDT’s pieces have explored mass incarceration, conversion therapy, gender-based violence, invisible disabilities caused by social media, psychological distress induced by pandemic lockdowns, the plight of refugees, and more.

In a constant state of learning, searching, and questioning what is meaningful in their art and lives, Tabula Rasa Dance Theatre tries to motivate audiences to examine their values and help repair our damaged society.

Escalante developed his newest program, an inventive but faithful update of Sophocles’s tragedy Oedipus Rex, after noticing how much the traumas of incest survivors remain shrouded in silence and shame. Oedipus Rex confronts this disturbing fact, calling attention to the deleterious effects that breaches of the taboo continue to have on individuals, society, and human evolution.

In this reimagining of Sophocles’s Oedipus Rex, Tabula Rasa Dance Theatre brings to audiences an opportunity to reflect on ethics, social responsibility, truth, and justice. 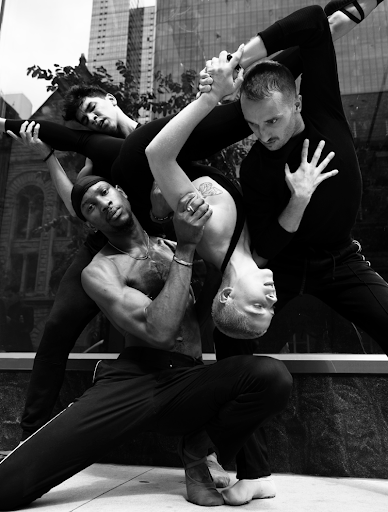 Amy Fine Collins: Why did you decide to found a dance company?

Felipe Escalante: Ever since I was quite young I knew I wanted to found a dance company. Starting from the age of 8 or 9, I began to make my own choreography, my own shows, in my head. I even figured out the lighting and props. My parents took me to contemporary, ballet, and popular dance shows, and I wanted to be just like the adults in those shows. I always knew that day would come, and here we are, building the company.

Who is the audience for a new dance company like yours?

I don’t think there is such thing as a different audience for different forms of dance. An elderly person and a 5 year old can both be touched by the same emotions or movements in a dance performance. An older person who knows the story of Oedipus Rex might be touched in a different way from the way a child is touched, because the adult already has some preconceptions about the story. The dances we do are in more than just one style and involve more than just one idea. Anyone who is interested in the performing arts, and in the fine arts is our audience. We have bodies moving like sculptures, we have lighting design inspired by Caravaggio, we have performers who dance musically to very complex music. And we have literature too - we pull ideas out of literature, like from Sophocles’s tragedy. Anyone interested in media is our audience, because we also make videos. People interested in artificial intelligence, in a robotic dog, are our audience. Psychologists who have studied the Oedipus complex are our audience. In short, my audience is everyone.

What choreographers and dance companies, in your opinion, are doing important work today?

Every company is doing important work. But there are very few choreographers who can transform a human being.

I am trying to understand the suffering of people, and who is making them suffer—a perpetrator, a parent, a partner, a politician. I make these pieces so that I can reflect what is happening in the world, show it in a different way. Many people don’t even know that these problems exist.