IT’S ALL GRAND WITH T’NIA MILLER

America has survived the 2020 presidential election. The world is still trying to figure out what to do about coronavirus (although a vaccine is on the way.) Meanwhile, Netflix’s The Haunting of Bly Manor actress T’Nia Miller is enjoying a balmy fall in beautiful Madrid. While she’s been enjoying her downtime, ever since Netflix dropped the top streaming horror series, she’s found more people recognizing her in public, and it’s been a real game changer for her. At the present moment, she’s grown bored of pandemic life, as have most of us, but she’s managed to spend more time with her family, binge television shows, and listen to reggae music (actors really are just like the rest of us.)

Miller landed the role of Hannah on The Haunting of Bly Manor in the very typical fashion. She was sent sides, then she watched The Haunting of Hill House to better familiarize herself with the material. Then, she read and recorded two scenes, sent if off to the casting director, and booked the role.

While Miller doesn’t have much experience in the horror genre, she is a big fan of horror films, although she acknowledges that The Haunting of Bly Manor isn’t your typical horror story.

“It’s different because it’s a romance,” Miller said. “There were some scary moments, but it’s scary in a different way because it really taps into your personal fears, regrets, and how we live our lives. It really speaks to that place and that’s what’s scary about it.”

Miller has had the tremendous privilege of being one of the few successful Black British actresses during a time when Black actresses still had to fight for their due. Although she believes that the industry is now doing a better job with Black representation, she also believes that there is a lot of work to be done. 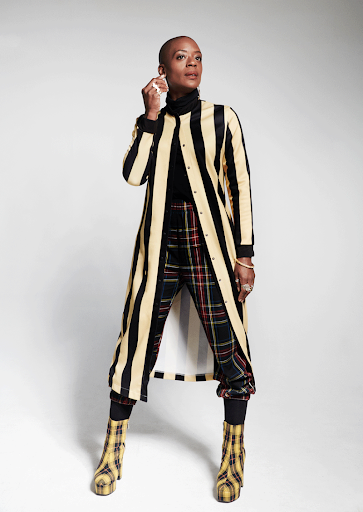 “Sticking one Black person in a movie with a cast of 100 white folks is not doing the job,” she said. “That won’t cut the mustard anymore. The industry is getting better about it, but in terms of diversity, South Asians and East Asian people are still underrepresented. Why can’t we all share the same together? And not just in supporting and minor roles. If a film has an all-white cast, I’m not watching it. I made that decision a few years ago. You’re not getting my viewership anymore.”

Throughout the course of her career as an actor, Miller has seen the film industry slowly transform, but coming of age as Black actor was still tough. She attended the Guilford School of Acting, where she said she felt more crushed than empowered.

“They absolutely failed the students of color when I was there,” Miller said. “Maybe now it’s different, but I didn’t come from a privileged background like the rest of the students in class with me at the time. I was a little bit older, I had 2 kids already, I was realizing I was a lesbian and separating from my then husband. They couldn’t understand why I wasn’t breaking down and crying in the middle of class. I remember within the first ten minutes of me attending school there, the head of musical theatre told me ‘you’re very lucky to be here because there are no good Black actors out there.’ I hadn’t experienced racism like that since I was a child really.”

Despite some of our less than perfect moments at Guilford, Miller also has a set of professors she refers to her as angels, including Peter Barler, who was the head of the school at the time. No matter how many roles she continues to add to her resume, Miller continues to remain humble and even admits she’s her own worst critic.