Celebrated jeweler Wilfredo Rosado ’s name is synonymous with whimsical and fantastical bold luxury jewelry. A protégé of Giorgio Armani and Andy Warhol, what makes Wilfredo so undeniably unique is his ability to take street style and reinterpret it into bespoke high jewelry. However, Rosado’s drool worthy statement pieces are reserved for those with generous expendable incomes, until now! Wilfredo has recently launched his new website, and with it a fine jewelry line attainable to any fashionista called, Pearl ID.

We caught up with Wilfredo to discuss the inspiration behind his fine jewelry line, the challenge of creating something never done before and how his unique background brought him to where he is today. 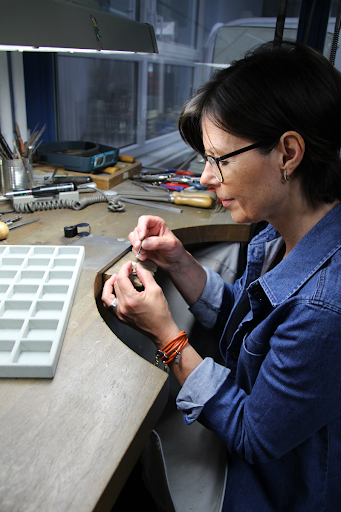 AS IF: I want to talk about your newest collection, Pearl ID. I found it really fascinating to learn that the idea was inspired by children’s friendship beads.

Wifredo Rosado: Yes, it was!

To carve into a pearl and inlay gold and diamonds is a radical idea. Tell me about the ah-ha moment when the idea first came to mind.

I’ve been doing high jewelry since 2011 and throughout my high jewelry journey I was approached on several occasions to produce a more affordable, fine jewelry collection. Then, one day I saw a friend who was wearing a necklace made of the plastic beads used for children’s friendship bracelets. It looked really chic on her—she’s a cool, urban, New York City woman and I loved the juxtaposition of seeing her wearing this naïve necklace. I thought it would be a great idea to recreate that childhood accessory in a luxe way using luxurious materials. I’ve always loved pearls and their opalescence; I love the story of pearls and I thought they would be perfect to represent the white bead. I started to imagine carving into the pearls with letters like friendship beads and the pearls could create words and names. So, that’s when the journey started, which became a lot more complicated than I thought it would be!

I imagine the process of carving into a pearl must have been time intensive. Where do you find artisans who can specifically carve pearls?

I read an article in The New York Times about a small town in Germany called Idar-Oberstein that specializes in gemstone carving. The town is recognized as having some of the leading gemstone carvers in the world. So, I called a friend in the gemstone business and told him about my idea and asked if he was familiar with this town because I became obsessed with doing my carving there. My friend introduced me to someone in Idar-Oberstein, which led me to someone else, which eventually led me to someone who said he’d give it a try. A month later he completed the first pearl carving and asked how many more I would need, I said, a few hundred and he panicked because the one pearl took a month! You have to understand, no one had done this type of carving before. I then started a journey to find artisans who were willing to do it. Once I found my artisans we had to create new tooling which enabled us to hold the pearls in place, as well as new tools that can carve pearls at the proper angles. That process alone took six months.